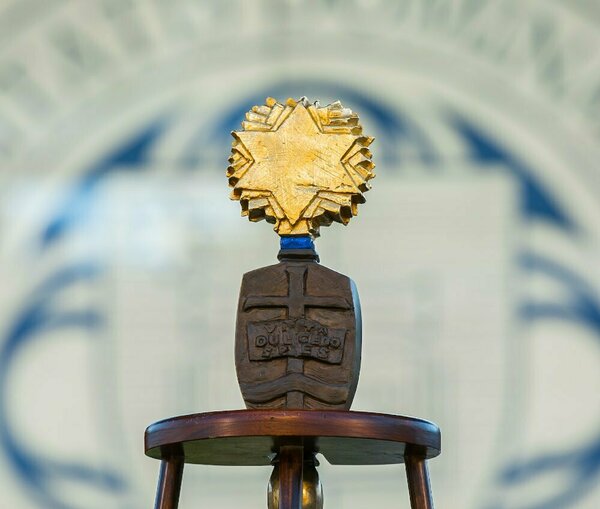 The academic scepter, or mace, was one of the earliest distinctive signs of medieval university officials. The mace was originally a wooden staff carried by royal messengers. The early wooden staff on the university beadle, a subaltern official, evolved in the 14th century into an elaborate silver mace. It was carried by the beadle during processions and graduation ceremonies, and was displayed as a symbol to command order during classes. In the 15th century it became symbolic of academic dignity. An essential part of the mace was the staff or cylindrical rod (tibia_), originally a tube of silver filled with wood or some other base materials. The staff, divided into several sections, was held together by a ring-shaped excrescence (_nodus). The staff was crowned with a bell-shaped head ; at the base was a finial (membrum terminale).

The Notre Dame mace was designed and executed by the late Rev. Anthony Lauck, C.S.C., professor emeritus of art, art history, and design. The bronze caput repeats the University seal found on the Presidential Medal, but brings the star outside the shield where its separate rendering emphasizes the patronage of the Virgin Mary. Its shaft is in walnut, and the star and the finial bear the University colors of gold and blue.

The tradition of a mace bearer was introduced at the inauguration of Notre Dame’s 16th President, Rev. Edward A. Malloy, C.S.C. The first mace bearer was the maker of the mace—Rev. Anthony Lauck, C.S.C. Each year a new mace bearer is selected, representing a different college or school.