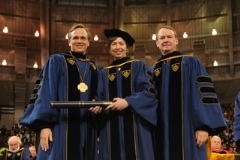 The Presidential Medal was introduced at the inauguration of Notre Dame’s 16th President, Rev. Edward A. Malloy, C.S.C. The medal, struck in bronze and plated in gold, was made by the Medallic Art Company, Danbury, Conn. It is worn by the President of the University during Commencement Ceremonies.

The seal of the University forms the center of the medal and is mounted in relief against a larger cross representing the Congregation of Holy Cross, the religious community that founded the University in 1842. In traditional heraldry, the shield unsupported and central in the seal as appropriate for an institution of learning. At the base of the shield are two waves which symbolize the waves of St. Mary’s Lake on whose shores the University was founded. In the upper left, the six-pointed star, considered the perfect form, signifies “Star of the Sea,” a title accorded the Virgin Mary, for whom Notre Dame is named. A cross symbolizes Christianity. The open book, emblematic of education, is inscribed with the Latin words, Vita, Dulcedo, Spes, or “Our Life, our sweetness, and our hope.” These words, first addressed to Our Lady by Saint Bernard, are taken from the familiar prayer, Salve Regina, or “Hail Holy Queen.”