The gonfalon, a banner that hangs from a crosspiece or frame, originated in the medieval republics of Italy as an ensign of state or office. Gonfalons have been adopted in many universities around the world as college or institutional insignias, and many use them to identify and lead colleges and schools within the university in academic procession. The nine gonfalons represent the University and the eight colleges and schools of Notre Dame. By tradition, faculty marshals carry the gonfalons during the academic procession. 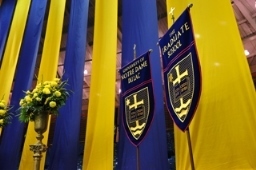 The lower half of the gonfalon consists of a shield with a clear blue field and a cross of gold. This is part of the armorial seal designed by Pierre de Chaignon la Rose of Harvard in 1931. The heraldic colors (gold and blue) are symbolic of the Mother of God, to whom Father Sorin first dedicated Notre Dame. At the shield’s base are two wavy lines (indicating the a Lacu, “of the Lake” in the University’s official title), and above them to the left is a star, another emblem of the Virgin, Star of the Sea. The cross represents the Congregation of Holy Cross, which founded Notre Dame; an institution of learning is denoted by the open book. The phrase Vita, Dulcedo, Spes, taken from the ancient prayer to the Virgin, the Salve Regina, celebrates her as “life, sweetness, and hope.”

Gonfalons were designed by Paul Wieber of AgencyND; commissioned by Watra Church Goods, Chicago; and manufactured by Slabbinck of Brugge Belgium.